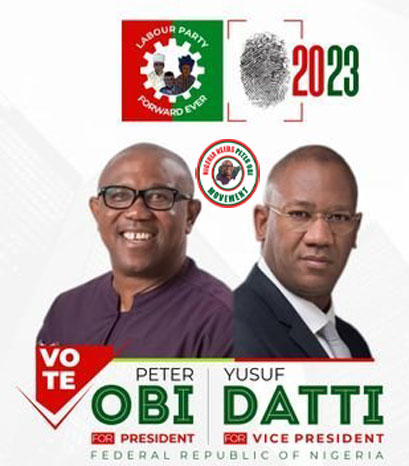 When HE Peter Obi, following the scandalous delegate vote buying game played in the Peoples Democratic Party PDP, decided to join the Labour Party, it was clear that the weight of the voyage greatly tilted one side in the PDP boat. But then, it was destiny’s way of separating the man of integrity from the raw cacophonous vote marketers!

Then the APC started rejoicing, shouting down roof tops and saying that since the Labour Party and PDP fish from the same pond, it was game over for both parties. Fishing from the same pond means that they enjoy the same catchment areas for votes. The difference between hallucination and dream was yet to knock on their heads, anyway!

Well, both APC and PDP started to see the real deal when the man of the moment effortlessly began to pull organic crowds across the country, especially among the youth. While staggering in their toga of same-religion presidential and Vice presidential slots, the APC could see across the fence a PDP wobbling in the pantaloons of same region dominance of party leadership. Ask Nyesom Wike and the G-5, the Integrity Group.

As the Labour Party continued to grow in popularity, a new strategy stirred up in the brewery of the traducers; name calling. In September, 2022 the vice presidential candidate of the PDP, HE Ifeanyi Okowa took a swipe at Peter Obi for visiting churches frequently, thereby accusing him of dragging religious sentiments into politics. Well, Nigerians promptly rose to the occasion and answered him accurately just like they did Governor Charles Soludo recently.

The Okowa attack came on the heels of the fear that Peter Obi was enjoying huge acceptance in many well populated churches in Lagos, Abuja and other cities. What Okowa did not know was that Obi was already a friend of many clergymen years before, just like the armed forces, labour unions, students and sundry professionals across the country.

The man Peter Obi has been called countless names by fear-torn opponents.

First he was tagged a mere social media blitz, together with his millions of followers, mostly the youth who were taunted as having no PVCs. But now the sky seems to be dropping on some people in very torrential bolts of rain.

At a time again, Peter Obi was tagged an Igbo Biafran face with a pro max level of readiness to divide Nigeria. What a fallacious hook-on!

Then they decided to engage within his home state. Soludo was still on his second script when truth loving Nigerians sparred no blushes in setting records straight.

Now the new method; a group that calls itself United Christian Youth Forum of Nigeria, UCYFN, has arisen to accuse Peter Obi of working against the Catholic Church because of his frequent visits to pentecostal churches. Imagine!

Whatever group of faceless politicians that made up this UCYFN, the mission of setting Obi and the Catholic Church, his own denomination will, like other desperate moves, fall like a pack of cards.

Dear, rumpled mind behind the venetian blinds, maker of mischief and rancour, we have seen fake Bishops (supposedly Catholic, Anglican, Pentecostal and others) hired and garbed, fake christian groups making endorsements and then sundry accusations against Peter Obi; all woven around Christianity, just to get at him. Let the UCYFN address those first.

After trying to neglect Christianity and it seems to backfire now, gear has changed to attempting to divide the Nigerian Christian voters. Nigerians are wiser now. This plot to demarcate us along denominational lines will still crack, collapse and scatter like its predecessors.

Yesterday Obi was at The Redeemed Evangelical Mission, TREM Lagos Headquarters where a mammoth crowed welcomed him. The ovation could not allow him talk for a long while till Bishop Mike Okonkwo started pleading for them to allow him say a word of greeting. Name callers, are you ready with the next name to give Obi? Forward it fast, but be reminded that no one has ever stopped your candidate from entering any church, at least for a test of popularity and acceptance.

Of a truth, the former Anambra State governor is an enigma, one man too many, and rightly so. No evil propaganda will stop the collective resolve of Nigerians to change the status quo come 2023. Mark it!

This is an Editorial from POEM 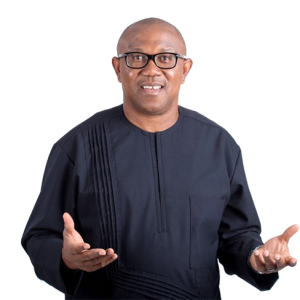 , HE Peter Gregory Obi to be given the chance to become the next president of Nigeria. END_OF_DOCUMENT_TOKEN_TO_BE_REPLACED